CH OTCH Morgen’s Lil’Bit of Skyefire TD UDX10 OGM MH24 AX AXJ VCX WCX** OBHF DDHF OS
I am way behind in posting updated news of Beau-D! He had a very successful year in 2017 and the beginning of 2018. In Oct. he had should surgery so is in recovery until Spring of 2019. More updates coming soon!
Performance puppies sired by Beau-D are available! See the litter listing page (updated 2/21/2019)
Beau-D won 10th place at the AKC National Obedience Championship
Twenty times in the ring over two days with 20 Qualifying runs
So very proud of Beau-D!! 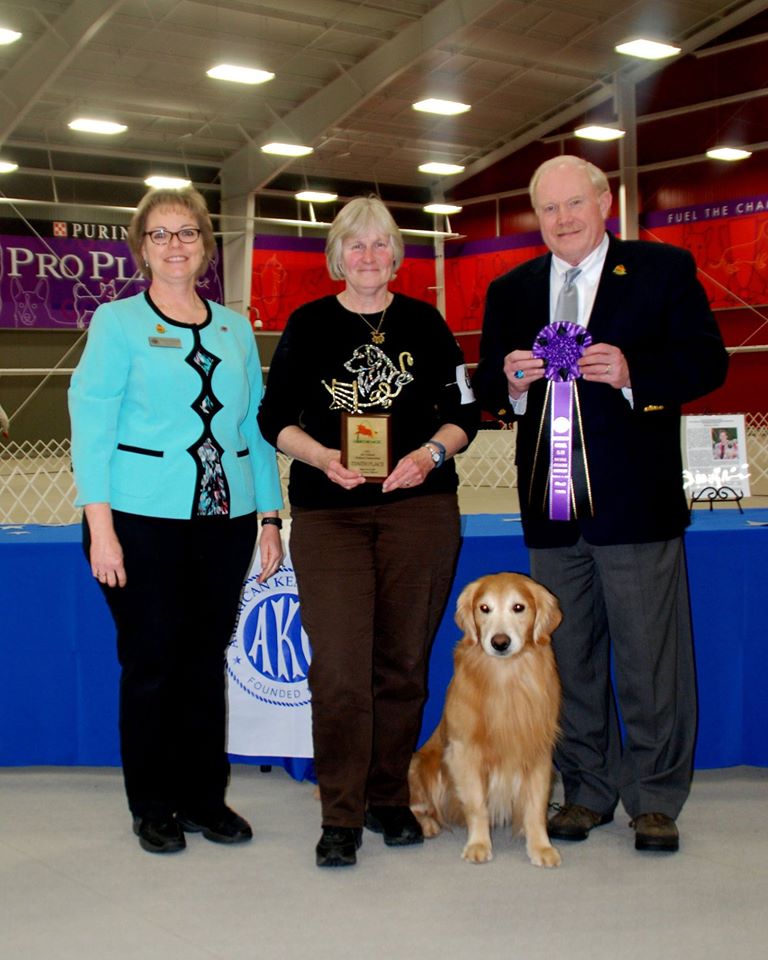 Beau-D finishes OAJ title 3/28/15 Thanks Ramona Cartwright for running him for me! 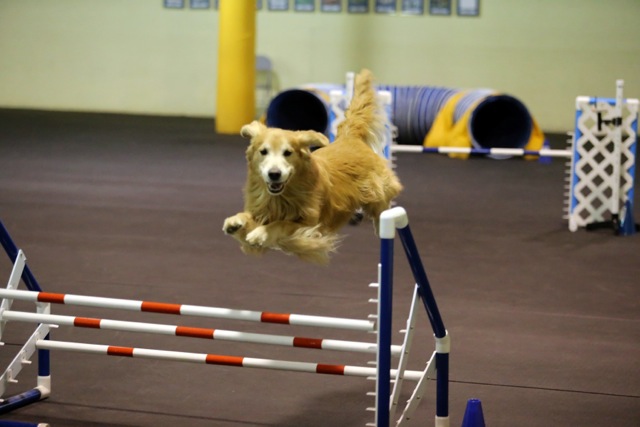 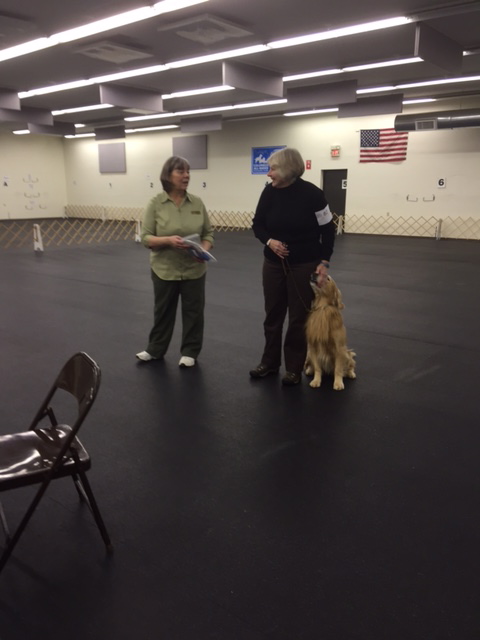 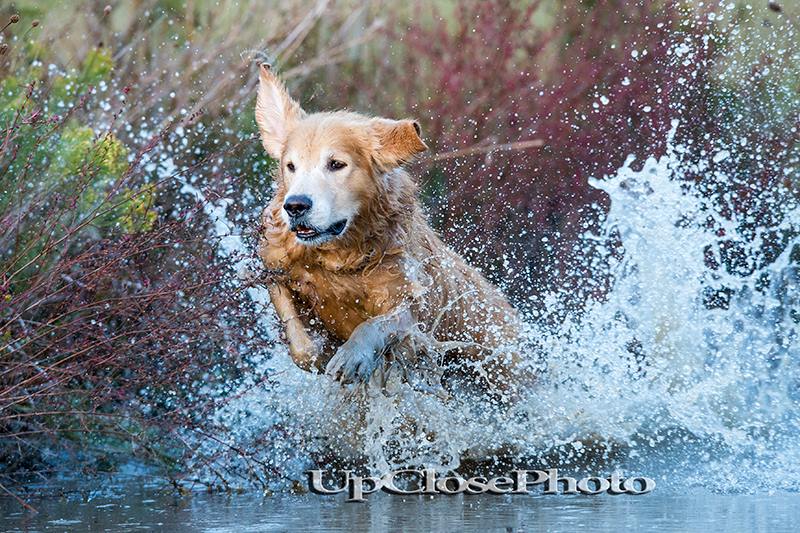 A dream realized!
Beau-D becomes the breeds first CH/OTCH/MH/** (plus DDHF OBHF) when he earned a JAM at the 2014 GRCA NS Qualifying Stakes Field Trial at the young age of 4 1/2 completely owner trained/handled to all performance/field accomplishments!
Beau-D has 11 MH passes as of 11/1/14
Goal for 2015: to qualify for both the 2015 National Obedience Championship (:-) and qualify for the 2015 Master National (2 more MH passes needed)
NEWS FLASH!!! Beau-D qualified for the 2015 AKC National Obedience Championship by earning top scoring dog at the Region 2 Regional Qualifier in July 2014. Scoring 1182 points out of a possible 1200. He earned 2-3rd place ribbons and a 4th. All of this after a nearly two month lay off while his owner (me) raised a litter of puppies and did not train!
NEWS FLASH #2 One week later, Beau-D captures 4th place at the 2014 All Star Obedience and Rally Tournament in the Super Dog Division. He lost a total of 17 points (two of them handler error-by me!) 2nd-3rd. and 4th were separated by 1 point!! Way to Go Beau-D
In between these two weeks of Obedience competitions, Beau-D and I had a chance to work on a new adventure-Field trials! We spent three days in Michigan with Pat Burns. In Pat’s words, “This dog can easily get a Qualified All Age, well maybe not that easy”. Carol Cassidy also suggested I run him in Field Trials after attending one of her seminar. So, on Friday Aug. 15, 2014 we entered our first trial (with limited training time due to those stinking cute puppies!) We made it through two series of a really tough test. Then he went on to pass a Master test over that same weekend!
Spring 2014 Beau-D adventures into Agility 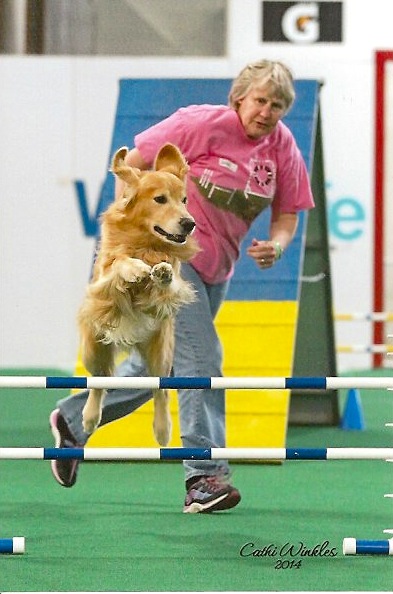 He earned is NA/NAJ and has 2 OJ legs and 1 OA leg
Agility has taken a back seat to his obedience and field work
Jan. 18, 2014
New OTCH (Obedience Trial Champion) at the Novi Michigan shows by winning both the OB and UB class and taking High Combined
Jan. 4, 2014
New UDX!!! Beau-D earns leg #10 at the Dayton, Ohio shows
Oct. 2013
GOLDEN RETRIEVER CLUB OF AMERICA NATIONAL SPECIALTY:
Beau-D wins BEST in GUN DOG SWEEPS from the MASTER HUNTER class
Thank you to Judge Barbara Branstad and Beau-D’s handler, Cortney Corral for this special honor.
August 3rd, 2013
Beau-D earned his Master Hunter title
(completely owner trained/handled)
Passing 5 out of 6 attempts this summer
Beau-D joins the elite group of goldens with the DDHF title.
June 2013
Beau-D qualifies for the GRCA OBHF
Becoming the first golden in 60 years to have both a DDHF and OBHF
And he is only 3 years old!! 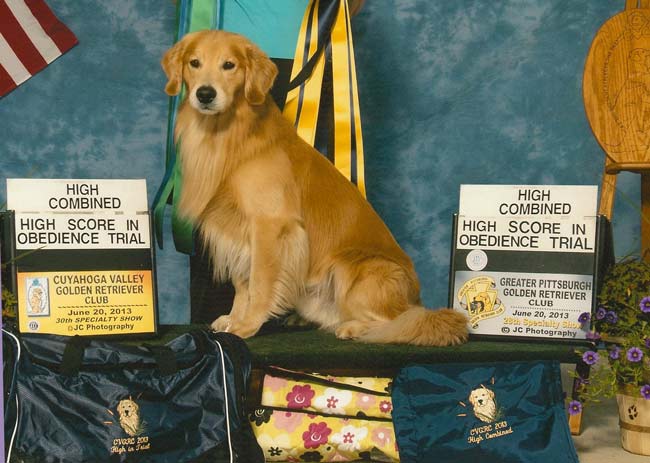 On April 14, 2013 Beau-D earned his Utility Title!
On Jan. 19, 2013
Beau-D finished his CDX at the Oakland Co. shows in Novi, MI.
He finished the title with a 198.5 and second place from a very competitive class. He earned his title in 4 shows!
Aug. 2013
ALL STAR TOURNAMENT
Beau-D wins the Novice Division in York, PA.
He lost only 5 1/2 points out of 600 possible points!
2012 GRCA National Specialty was a great week, spent competing, watching several Skye puppies show and catching up with people I haven’t seen for a while!
Beau-D earned the Triathlon Award by placing 3rd in Grad Novice (197 1/2), 2nd in the Senior Hunter Gun Dog Sweeps and passing the WC. He also had a 197 1/2 in Novice B (with a handler error) and placed 3rd in the very competitive Hunting Retriever Class.
I was so excited when Beau-D made it to the 3rd series of the Master A test! He was the youngest in this group and the only Champion to make it our of the 1st series. The overall pass rate was in the low 30%. I was so proud of Beau-D. We’ll be back out in Master next summer!
Beau-D earns 5th High In Trial at Cleveland All Breed Training Center Trial on Nov. 3, 2012 which finished his Novice career. He showed 7 times in Novice B, earning 5 HIT!!
Beau-D takes High In Trial at the Cleveland IX show his first time out in Open B by winning a run-off on Dec. 15, 2012.  The award is presented in the Best of Show ring in-between some of the breed classes-what a thrill! They clapped for his drop on recall demonstration!
↑